Credit to naxaso from 123RF Stock Photo for the magnificent photo!

Herodium and Bethlehem tour offers a special way to explore both History and Christianity.

During this unique day tour, we will visit the Herodium – Herod’s the Great fortress and Bethlehem, the birthplace of Jesus Christ.

You might also be interested in extending your Christian experience by conjoining this trip with our VIP Tour in Jerusalem Old City.

In addition, since Bethlehem is a Palestinian city, it is required to bring your Passports with you during this day –  in order to cross the border.

Highlight of the tour

The Acropolis of Herodium – Herod’s Palace and Tomb

We begin our Bethlehem Tour with a visit to the Herodium located about 3 miles from Bethlehem.

The Roman client king of Judea, Herod the Great, has built this Ancient acropolis sometime around 40 BCE.

After the Parthian conquest of Syria, Herod fled to Masada.

On the way, at the location of Herodium, Herod clashed with the Parthians and emerged victoriously.

According to the Roman Jewish historian Josephus Flavius, Herod “built a town on that spot in commemoration of his victory, and enhanced it with wonderful palaces… and he called it Herodium after himself” (The Wars of the Jews I Chapter 13).

The Crusaders called this fortress the “Mountain of Franks” and the Arabic local population calls it “Mountain of Paradise”.

Twice During its history, the fortress was under siege by the Romans during the Jewish Rebellions.

We will visit the Herodium Excavation of Herod’s Palace and the place which archaeologists recognize as Herod’s tomb.

Bethlehem Tour – Arriving in the place where it all began 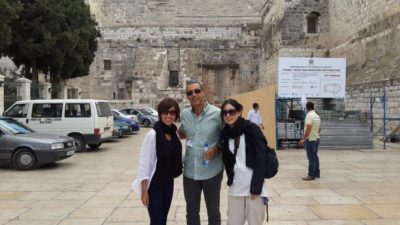 The Entrance to the Church

Finally, after finishing our visit in the Herodium, we will begin our drive towards Bethlehem, passing through the Israel-Palestinian Border Checkpoint.

After approximately 35 minutes’ drive, we will be in the birthplace of Jesus Christ, the Town of Bethlehem.

According to the old testament, Rehoboam – King of Judah, built the city of Bethlehem as a fortified city.

In the Gospel of Luke, Mary the Virgin and her husband traveled from Nazareth to Bethlehem for the Census of Quirinius.

Upon our arrival, we will visit the Church of Nativity which is located in Jesus Birthplace.

Saint Constantine and his mother Saint Helena commissioned the original church in 327 CE. 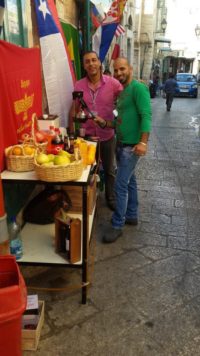 A glimpse of Bethlehem Streets

The old church was destroyed in the 6th century During the Samatarian Revolt.

In 2012 UNESCO designated the church as a World Heritage Site.

After finishing our visitation to the church, we will continue with our Bethlehem Tour to Manger Square.

Manger Square is a city square located in the center of Bethlehem.

The Square is named after the manger where Jesus was born.

Two significant buildings are located there; the Mosque of Omar, the Old City’s only mosque, and the Palestinian Peace Center.

Manger Square serves as the center of Christmas celebrations in Bethlehem, with a giant Christmas tree crowning the square.

During Christmas locals and pilgrims sing Christmas carols in the square before the midnight mass at the Church of the Nativity.

In addition, during our visit to Bethlehem, you will have some free time to enjoy the city’s local restaurants and shops.

Bethlehem is a Palestinian city located in the central West Bank.

Today, the city has a Muslim majority but is still home to a significant Palestinian Christian community.

As a result, Bethlehem Tour is highly recommended during Christmas time but it is important to book in advance.

Holy Land VIP Tours is the only company in the Holy Land that offers Private Luxury Christian tours in both Israel and the West Bank, accompanied with certified Christian guides.

We offer some vast combined tour opportunities in the West Bank and Israel such as our Tour in Ramallah and Taibe.

In addition, we offer many tours in the Cities of the Holy Land such as Nazareth, Jericho, Jerusalem and many more!