Ein Gedi, Dead Sea & Masada tour is one of our best Private tours in the region of the Judaean Desert.

During this private day tour, you will visit three of the most famous places in the Judaean Desert.

Moreover, we recommend you to combine a Jeep tour or Camel ride during this day – the best ways to enhance your experience.

It is hard to determine what attracts tourists to those places.

Nevertheless, whether its the beautiful landscapes of the Judean desert or its historical significance, one thing is sure:

This is definitely our best and our most demanded private experience in the southern region of the Holy Land.

Ein Gedi – “The Spring of the Young goat”

We begin our day tour with a drive from Jerusalem, descending through the Judean desert towards the Dead Sea.

First, we will stop at Ein Gedi National Park.

Literally “spring of the kid (young goat)”, Ein Gedi is an oasis and a nature reserve in the Holy Land.

The springs are located west of the Dead Sea, near the Qumran Cave and Massada.

In addition, the national park is a sanctuary for many types of plant, bird and animal species including the rock rabbits and the Nubian goats.

We will explore this magnificent park and learn about its history and its “residents”.

After finishing our visit, we will continue to our next destination!

We continue our tour of the ancient fortifications of Masada(literally meaning fortress in Hebrew).

We will ascend towards the ruins, which are located on the eastern edge of the Judaean Desert, overlooking the Dead Sea. 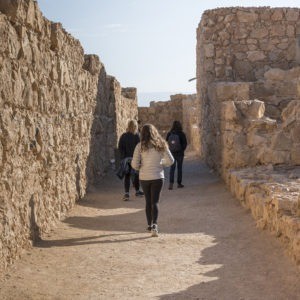 Visitors strolling through the ruins of Masada fortifications

According to the Jewish-Roman historian Josephus Flavius, the site was first fortified by Hasmonean ruler Alexander Jannaeus in the first century BCE.

Additionally, according to the historian, Herod the great erected two palaces for himself on the plateau as a refuge for himself in case of rebellion.

The fort is best known for being the last place of Jewish resistance during the Great Revolt against Rome.

According to Josephus, the long siege has led the defender to commit mass suicide instead of falling into captivity.

We will visit the archaeological site either by taking the cable car or by taking one of the famous hiking paths.

After finishing our visit to the national park, we will continue to our final station – the beaches of the Dead Sea.

Again, we will descend towards the Dead Sea to the resort town of Ein Bokek.

We will soak in the famous waters of the Dead Sea, taking all its nutritional values.

Finally, after enjoying the sea, we will begin our long drive towards Jerusalem\Tel Aviv, back to your hotel.